“Spinks have designed our dream home!” 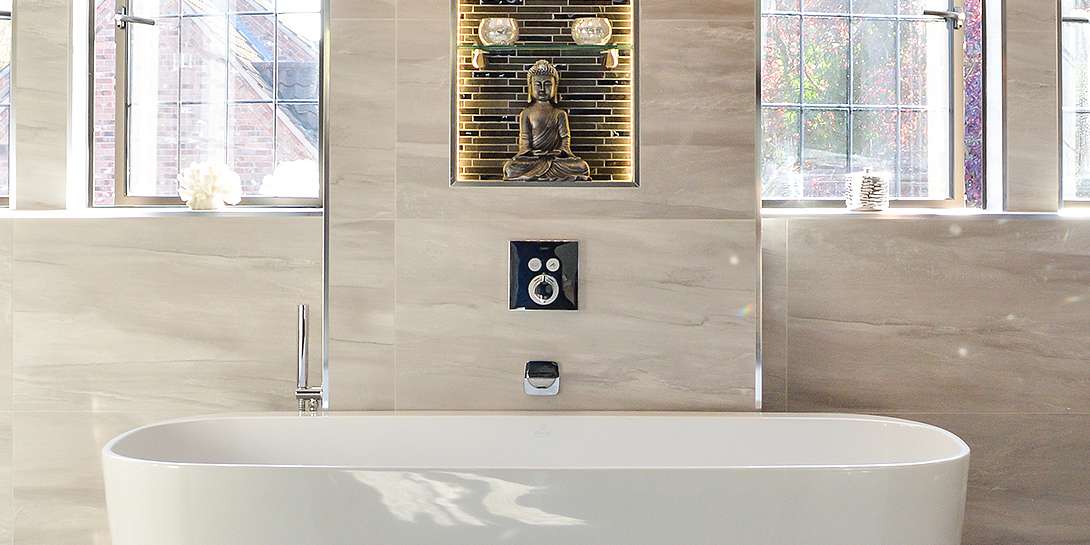 Mr and Mrs Batey needed 6 bathrooms to be designed and built into their new home, consisting of a master ensuite, an ensuite for their young daughter, two guest ensuites and two downstairs cloakrooms.

The couple met with Marie, our bathroom showroom manager to discuss their ideas. They wanted their master ensuite to be a ‘wow’ room and had been inspired by an ensuite they had previously used in the Mayfair Hotel in London. They took photos and gave them to Marie to see what she could come up with to work with the space available.

The Batey’s knew they wanted a freestanding bath to sit in front of grand double doors when you enter the room, a large shower, wall hung toilet, some under basin storage and a TV. They also wanted the bathroom to use symmetry and balance, and the colour scheme had to be grey.

Marie created CADs for each room that were exactly as the Batey’s wanted. It was agreed with the builder that the width of the master ensuite needed increasing from the architects plans to ensure everything that the customer sought would fit.

New dividing walls were designed to conceal the WC and to include a bespoke shower unit big enough for two. The shower comes with two tiled seats and Marie suggested electric heating was built into them for ultimate luxury. The Batey’s have a huge 500mm ceiling mounted shower head with separate waterfall and hand shower.

It was debated where the TV should be positioned for optimum viewing when laid in the bath and Marie recommended having a bespoke mirror made with an incorporated TV – when the television is turned off you can’t see it, it looks like a plain mirror which Mrs Batey loved.

As the house was a new build, Marie conducted numerous site visits at various stages of the construction and liaised with the customer’s builder, joiner, electrician, plumber and tiler to make sure the plans converted and were built just as they were intended.

The 6 finished rooms are fabulous and everything the customer intended them to be. The double doors in the master ensuite open to a wonderful freestanding bath and finishing touches including shelves and feature walls were applied to make the space more feminine and homely.

Overall, the bathroom project took around 9 months as there was so much to do. The architect’s drawings were given to Marie just as the new house build had started, which gave her the scope to move walls and waste positions to exactly where was needed.

As Spinks supplied the kitchen, utility, dressing rooms and all tiles for this property, including over 150m2 of white marble effect porcelain for the downstairs floor, it is one of the largest projects Spinks Interiors has ever worked on. The customers love everything in the house – almost as much as we do!

“We have used Spinks Interiors for the majority of rooms in our new home and would highly recommend them!”

Thinking about your dream bathroom?