“We’ve always known Spinks as the place to go for Bathroom parts, design and installations!” 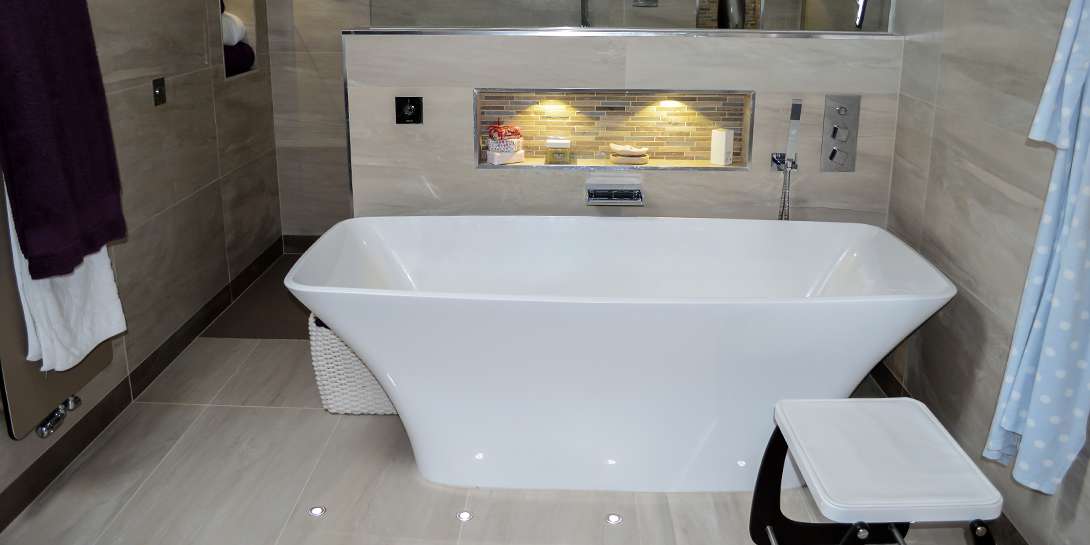 Mike and Jane Jackson have lived in their current property for more than 30 years. They decided they wanted to update a few areas of the house and add a substantial extension creating a new master bedroom and ensuite.

The Jacksons have known of Spinks for many years, Mike worked on a couple of projects for the company as a flooring contractor and they have always bought central heating parts from the company too.

The couple also wanted the ensuite to look the part but also be practical, storage was something they wanted plenty of.

The couple visited the Spinks Showroom and loved what they saw. They then sat down with Marie, the Spinks Bathroom Manager to come up with the designs!

Mike and Jane fully utilised the Spinks design service which included CAD drawings of how the new ensuite would look. The couple said that these images really helped them visualise what the bathroom would look like and proved to be invaluable.

Marie, Spinks Bathroom Manager helped the couple every step of the way and introduced them to different brands they could take advantage of. The couple opted for a Dansani double basin, from the highest veneered specification range called Calidris in Dark Oak, a matching stool from the same range which happens to be Janes favourite featured accessory.

They also went for a stunning Victoria and Albert- Ravello, volcanic limestone bath which is the main feature of the room adding the wow factor!

Jane wanted a seat in the shower – like one she had seen in a lavish hotel recently. After describing it to Marie, Marie recommended rounding off the edges of the seat rather than having it square. Jane was glad she agreed with Marie’s suggestion as the seat proves very handy.

The family also wanted Spinks to source the lighting, they opted for ceiling and floor spotlights which helped create a flawless ambience.

The beige tiles were from the Villeroy and Boch and they finish the room off perfectly!

The result is of just pure opulence! The room offers lots of space thanks to meticulous furniture placements and is the couples favourite room of the house.

The room is light and airy, with every space beautifully designed and is a very practical room – providing just what the Jacksons requested.

“The bathroom showroom was amazing and then we met Marie – we were sold on using Spinks from then on! She was great and had some fantastic ideas!”

Thinking about your dream bathroom?